Following catching-up with some old Ford Fiesta friends (when a few of us were petrolheads in our formative years) I thought it’d be interesting to put together a complete list of all the vehicles I’ve owned. Of course many people have owned lots more cars than I have, but it is an odd list looking back at it. In the hope some of you might not scroll to the bottom of the page, the list is in reverse order!

September 2015 to June 2021. Spotted while I was on a work assignment in San Rafael in California, and turned-out to be a great bike. The bike had 2 miles on the clock when I bought it so was not technically brand new; it was originally bought by a production company so that John McGuinness, of Isle of Man TT racing fame, could make his entrance onto stage in suitable style as a surprise guest at the EMC-World conference in Las Vegas (May 2015).

The bike’s VIN was #00002, and with Honda keeping #00001, this bike was the first special edition (SP) to come off the 2015 production line. It had a bunch of great mods such as no passenger seat and fully-adjustable Ohlins suspension.

Sadly the bike was stolen in June 2021, and although recovered within a week, damage to every panel on the bike in addition to a litany of small fixes like broken brake levers rendered it an insurance write-off / total loss. 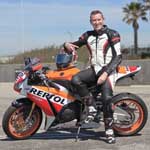 June 2014 onwards. Despite its age this bike only had two previous owners, one of whom was a California Highway Patrol officer! I was lucky to find a Gixxer which had not been thrashed and was low mileage. It was fun when I got it and is still a bunch of fun seven years later! 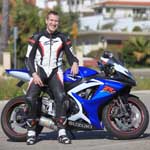 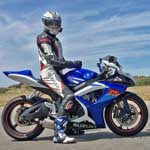 May 2010 to April 2011. Literally the most boring SUV I had ever driven. Retail list price $22,000, depreciating to $4,000 in just two years, which speaks to the awful plastic temporary nature of this car. Thankfully I was able to convince my company to swap the car out for an Infiniti!

December 2007 to April 2010. Drove past this car on the way to Bath just before Christmas 2007 and bought it the next day. I’ve never bought a car on impulse before, although I guess I knew the model well. So nice to be back in TT comfort-land, although the petrol is a bit steep!

March 2007 to December 2007. Having been in the USA for two years and gotten accustomed driving a squidgy Honda people-carrier I was trying to steer clear of the expense of a sporty car, but wanted something with a bit of a kick all the same. Scouring around the market I spotted this bright red Audi A3 Sport over in Milton Keynes. Nice car but it had its problems, more than a five year-old Audi should have!

After the alternator gave up the indicators went into sporadic mode, then I was faced with six or seven mysterious flat batteries, the cause eventually being traced back to a faulty brake light switch which meant the brake lights stayed on permenantly – apart from when I put my foot on the brake pedal! Then after connecting the battery the wrong way round when getting a jump start (yes I know, I’m an idiot), I blew the radio. A few weeks after that the Air Bag lights lit-up, and a visit to Bristol Audi identified £1,300 of work needing done. Long story short, it got whittled down to a new fuse for the radio after some much more thorough investigation by the garage (i.e. not just connecting up to the computer and reading out what it says is wrong). Be your own judge of Bristol Audi!

February 2005 to January 2007. While on a work assignment in the US I was given a lovely silver Honda CRV...perfect for cruising to the mall on the weekend or generally clogging up the roads on the Eastern seaboard. Nice car, automatic of course, but a big zero on the fun factor. Mind you I never complained when there was eight inches of snow overnight and the drive to work was easy.

I washed it once in two years :-o

August 2004 to January 2005. My first Audi, and what an Audi it was. Deciding that the TT was for me, I scoured adverts for months until a pristine TT (it had to be with the Bose sound system of course) came up for sale, way up in the north of Scotland. The car was immaculate and had one owner since new who had only driven it 6,000 miles...nice of them to break the car in for me!

I still think the Denim Blue with Black interior is one of the best combinations for this car, certainly much more attrative than the baseball interior they came up with on some models (did people really order them out the factory like that?).

Due to my secondment to the US it transpired that I only had the car for six months (and a month of that I was in Australia), but it sure was was great fun while it lasted.

Early 1999 to August 2004. After all the mucking about with unreliable and “going-out-of-fashion-fast” cars (the Saxo was flooding the market with cheap insurance even for young kids), I decided it was time to move upmarket a bit. I can’t remember how I happened across this car, however I loved the fact that the Integra Type-R didn’t have any other variant in the UK: you either had the “bat out of hell” or nothing at all.

Back in the day the Integra was an enthusiast’s car. Honda limited the release of Integra Type-R’s in the UK and so drivers waved at each other when they passed, each knowing just what a monster lay under that bonnet. That was the funny thing about the Integra: you could drive it like a normal car and never know what happened when the revs clocked over 6,500 rpm. But that’s where the Integra liked to live its life, in the magic rev range from 6-9.5k rpm. What a stunning performance as you piled into corners with the engine screaming!!!

By the time I started thinking about selling the car the style was beginning to look a bit dated; the new model was out in Japan and imports were flooding the UK market. It was time for a change!

November 1998 to early 1999. Trying to continue the Fiesta dream just wasn’t going to happen. I should have realised that before I bought this next Fiesta...anyway it was fun for a bit! Ford pushed the limits of the Fiesta with the RS Turbo model, to the extent that there was always some seal or pipe leaking/breaking/corroding. Still, that whoosh of the turbo as you pulled away from the traffic lights was always amazing fun.

Sometime in 1995 to 31st October 1998. This was THE car. I can’t remember what drove me towards the Fiesta XR2i, perhaps it was one too many Pug 205’s on the road and seeing one too many booted-out Astra GTE’s for sale. Who knows? I still remember seeing what would become my Ford Fiesta XR2i for the first time at a garage called McKinnon & Costello near Meadowbank Stadium in Edinburgh. In the ten seconds it took me to walk around the car I knew I had to have it. It had some very subtle modifications by replacing the normal blue bumper trim with a bright green trim, so it was nicely set apart from other cars. It also had a bloody great sticker in the back window which appealed to the youngster in me!

Of course it cost a heap to insure but it was worth it. I put some web pages together about the mods I started doing to the car and picked-up the interest of some other XR2i enthusiasts around the country, some of whom I still keep in touch with. That led to track days up north and massive car show events (TRAX, anyone?) as far south as Kent, the bunch of us comparing notes as to what the latest trick mods were and what was next on the agenda for modification.

I stuck with the car for years and poured huge amounts of money into it and ended up having it featured in a bunch of magazines: Car HiFi (the stereo system was pretty awesome for its time and had surround sound and a Graphic EQ), a Fiesta meet in Max Power, and then a great article in Performance Ford magazine.

Sadly in some freak freezing weather at the end of October 1998 the fun all came to an end when I was involved in a head-on collision on black ice. Ironically I was going to collect photos I’d taken of the car that very afternoon, and it was before the Performance Ford feature had even been published. Still, I got some good sales out of bits which weren’t damaged which went some way to help make up for the money I should have known I’d never get back.

I used to have a web site about the car, maybe I’ll put a few pages up online soon for posterity! In the meantime check out the links below to the most prolific magazine article. 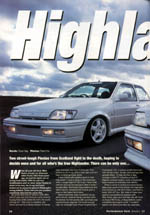 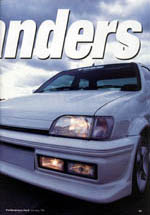 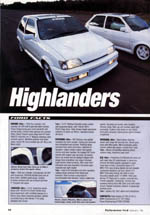 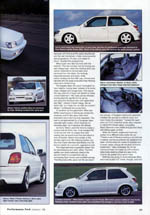 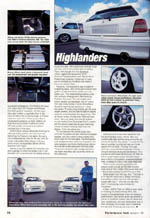 1994 to 1995 ish. For some strange reason the Renault 19 really grabbed me so it became the next car of choice. A bit too quick off the mark, I bought the saloon version (Chamade) instead of the Hatchback, although it was probably also a lot to do with money.

It turned-out that I didn’t really like the car after all, and in an effort to jazz it up a bit my first “modding” effort was to buy a set of side skirts for it - shame I never fitted them! A few more deliveries for the local Chippy and I decided it was time for something far sportier...

September 1993 to 1994 sometime. Ahhh, "The Big Red Fun Bus". The picture above (from the front cover of our School Yearbook) is of the actual car because I couldn’t find any sample pictures on the web!

This car was inherited from my Dad when I passed my driving test in September 1993. Being one of the oldest in my school year I was the first to have a car for some time so it became a very popular mode of transport.

It was kitted out with some silly speakers in boxes which I made (they kept falling apart). It had shaving foam sprayed on it, eggs thrown at it and all sorts. For a while it even did the deliveries from the local Fish and Chip shop!

There’s nothing like Russian engineering though for its reliability; when it came time to get rid of the car it was bought for quite a reasonable sum by Russians in the Port of Leith, returning to Russia having shipped cargo over to the UK. I recall the contacts on the distributor cap used to gradually choke up with carbon until they wouldn’t fire - at which point the car spluttered to a stop. I always amazed my friends by hopping out and taking a file to the contacts inside the distributor car then starting the engine again which roared into life. Bet you can’t do that with your Vorsprung Durch Technik ;-)